DSP or Ad Server? The Best Tool for Your Media Buying Revealed

If an ad server and a DSP seem to you to be the Marvel and DC of the programmatic advertising universe, then you came to the right place. Because they're not. The sooner you figure out the difference between a DSP and an ad server, the sooner you'll get the most of your digital ad campaigns.

Although not being the same and despite having rivaling fan bases, Marvel and DC are very similar stories. Both universes became cradles for the most popular superheroes. Both are featured in the multi-million-dollar Hollywood movies and both published 40,000+ thrilling comic books. Some characters of Marvel and DC definitely belong to one breed: take Deathstroke and Deadpool, Cat Woman and Black Cat, or Iron Man and Steel.

Are the ad server and the demand-side platform the same as well?

Both are used for media buying on the web and both act as a platform to unite these activities in one place. For those who have never used ad tech software for themselves, their purpose is almost identical — to place ads on websites or mobile apps with highly leveraged automation algorithms. Thus, an ad server and a DSP could be both called a digital ad serving technology, which is thriving in 2019. But if you ask a seasoned advertiser about the difference between an ad server and a DSP, they may only give you a smirk if you compare this to Marvel and DC in the comics industry. A DSP and an ad server are not interchangeable phenomena the choice between which boils down to personal preference. They are standalone solutions used for entirely different purposes.

What is an Ad Server?

An ad server, first of all, is a server. Haters gonna hate, alligators gonna alligate, and servers gonna serve! For example, web servers are used to store, and eventually deliver web pages to the internet user. An ad server is also a web server, but it is one which contains all the info about the ad and is responsible for placing it on the right website. It can also be turned into the whole platform where you launch and manage online advertising campaigns.

Advertisers use ad server platforms to aggregate all campaigns in a single dashboard and simplify ad campaign management. 3rd-party ad servers also have pretty solid reporting & analytics features, so the advertiser can retrieve actionable insights from all channels and optimize campaigns in no time.

Publishers bear in mind another goal while using ad serving tools. They need an ad server to manage all accessible inventory ad slots across their sources and transmit data on the available audience to the advertiser's ad server.

Ad networks as all-round players can use it for all these purposes and connect publishers to advertisers. The latter in this case lack control over their ad campaigns, handing the scepter of power to the chosen ad network. For clarity, here is how the Epom Ad Server features the “Network Manager” mode, where you can manage your clients and take required actions: 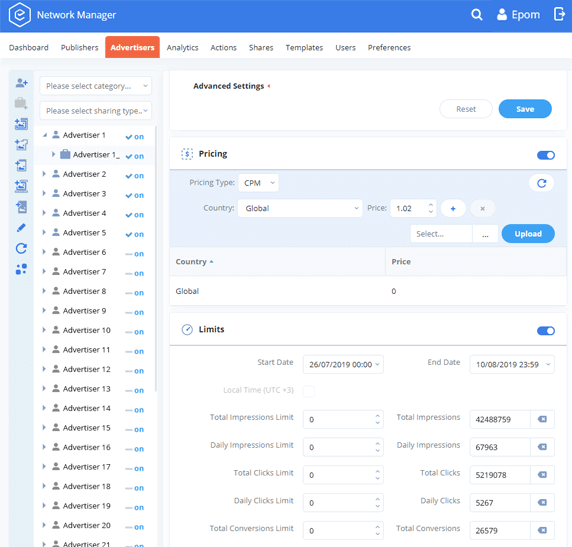 Worth noting, publishers, advertisers, and ad networks use an ad serving technology for direct media buying, which shouldn't be confused with programmatic. Direct media buying is that old-fashioned way to trade ads where all parties had to negotiate prices and conditions of ad serving in person. It hasn't changed much now, yet they can still automate a large heap of routine actions by setting up an ad server.

You can pre-define your targeting options by being both the advertiser or the publisher rather than to discuss it with numerous partners to find the match. The number of impressions or conversions is set up in a single click. CPM and other price attributes can be specified in the ad server software, as well. Overall, this is how ad serving works here: However, an advertiser's ad server is not the simplest software for digital advertising, despite being the most precise tool on the market with nuanced controls. Thus, individual advertisers with a small monthly ad spend usually assign this to ad networks or utilize a self-serve demand-side platform (DSP), which has a much shorter learning curve.

What is a Demand-Side Platform

The differences between a DSP and an ad server start straight from the method of media buying used here. 3rd-party ad servers primarily involve ad tags and trade ad placements utilizing a waterfall auction, where the highest-priority advertiser wins an auction despite its bid. Thus, you can win an impression by setting CPM at $1.5 and having a premium priority, while your rival will concede it with $5 CPM and low priority.

So what is a DSP in advertising, and why it's a different-yet-same thing as an ad server? A demand-side platform is another piece of software that is used for programmatic media buying, which implies that publishers and advertisers don't negotiate prices, but participate in a real-time-bidding auction instead. The DSP platform automates this process and requires minimum effort to secure an ad placement.

Real-time bidding auction means that all advertisers are on par with each other. The highest bid defines the winner: if you place a $4.3 CPM and all other bids are lower than $4, you win the impression. This is how it works:

Never mind ad exchanges and bid managers — they work faster than a blink of an eye. With DSP programmatic software, you're not involved in the tech stuff and enjoy fully automated ad serving, where you set up a programmatic campaign and forget about it for a while. The DSP will automatically match your campaign to the right audience on the publisher's website.

The interface of a DSP is streamlined compared to the ad server platform, but this comes at the price of less detailed settings of each campaign — fewer targeting attributes (100+ against 50+) and less accurate creative adjustments. Overall it's more convenient for beginners, especially with examples like Epom DSP dashboard looking neater than the notorious Facebook Ad Manager: 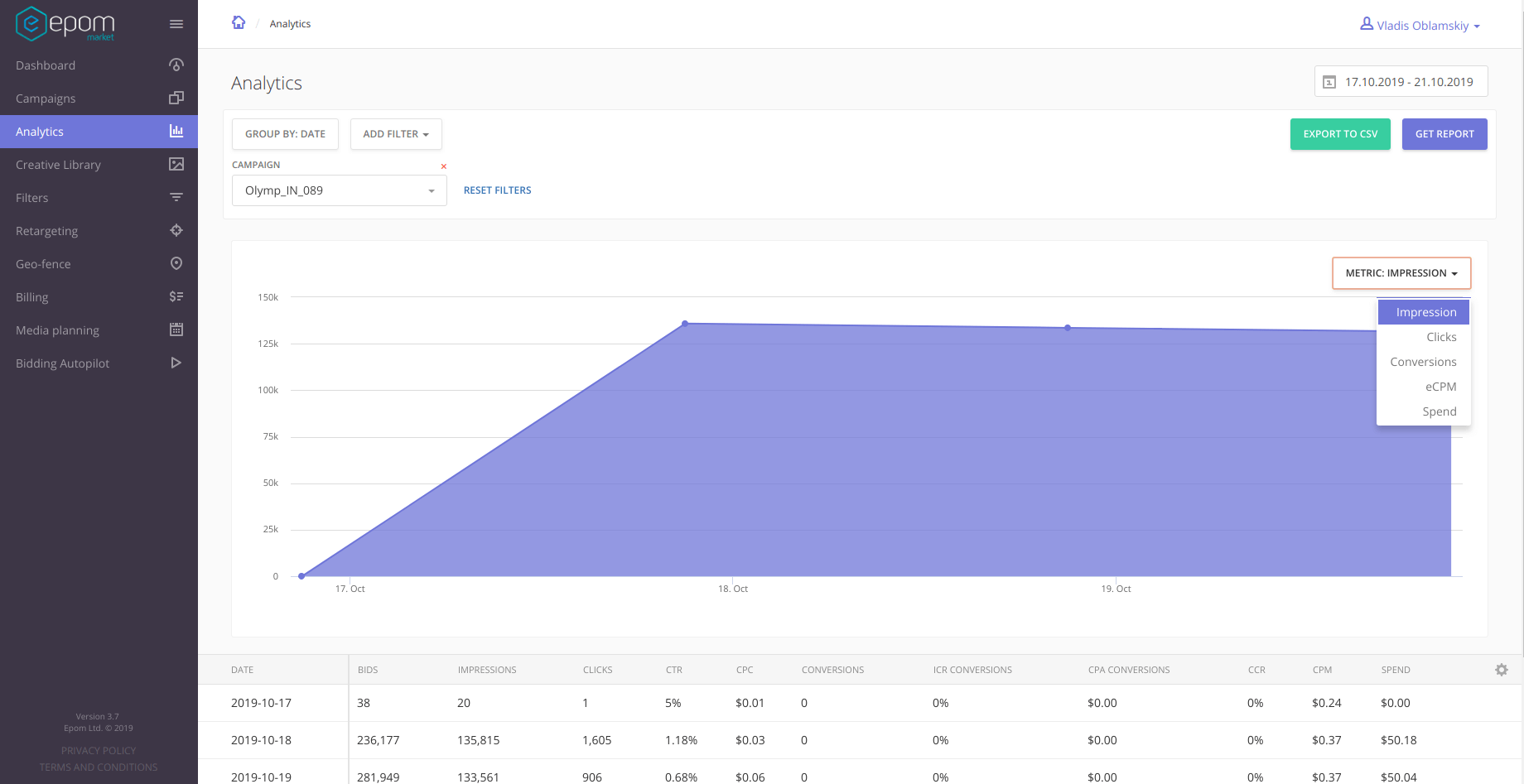 The DSP ad serving platform is famous for its real-time analytics and automated optimization features to minimize the time spent on ad campaign management. For example, Epom DSP features bidding rules, where you set up your KPIs and let the platform ensure their fulfillment.

The word “demand” in the DSP technology term hints that this platform is used only by advertisers or by ad networks that represent the advertiser's side. Supply partners, aka publishers, use a supply-side platform, which is a reverse tool that is used the same way but for ad inventory management and optimization.

The DSP's simplicity attracts all kinds of advertisers, from newcomers to the industry who serve only thousands of impressions per month to established players who seek more control and transparency of their programmatic media buying.

Ad networks may utilize DSP marketing as well, although they may need a white-label demand-side platform instead of a self-serve one. “White label” means that you get a replica of a specific DSP and become the rightful owner of this piece of software. Only a white-label DSP may give you full access to the publisher's data, allow you to open accounts for your advertisers, and eliminate bid markup that is always present in self-serve DSPs. 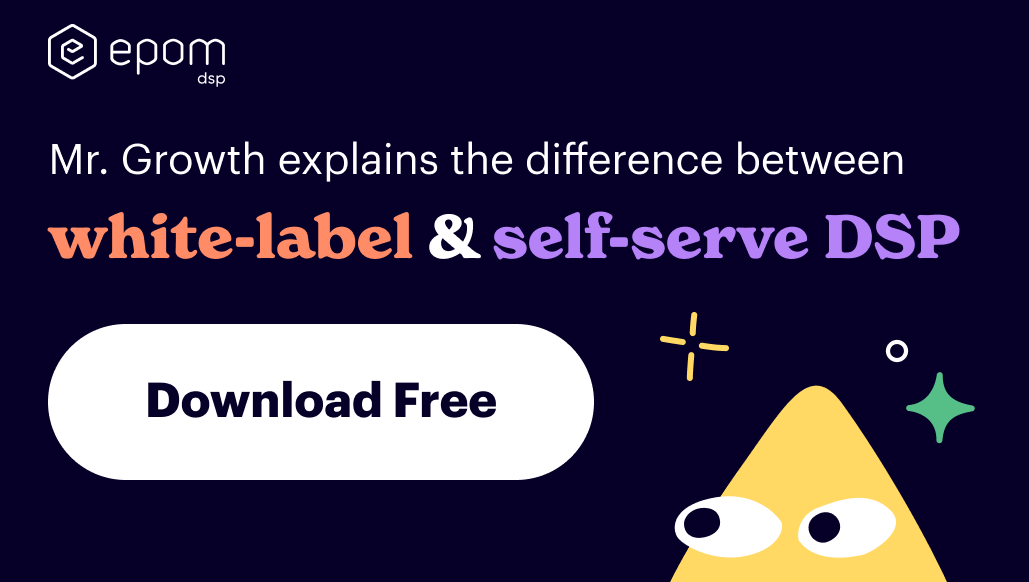 DSP vs. Ad Server for Advertisers: PROS and CONS

Rewinding what's been mentioned above, we can state the following:

Those differences lead to specific advantages and shortcomings of each piece of software, which you may want to consider before choosing the one for your business.

To make your choice easier, we decided to make a short FAQ section with the answers to the most disturbing questions.

What is the traffic difference between DSP and Ad Server?

In the ad server, traffic is coming from the publishers you are connected to or from the waterfall auction based on tags. The quality of its traffic depends on your choice. In a DSP, the traffic is coming from supply-side platforms that take part in an RTB auction. SSPs, in turn, select the traffic sources on their own. The quality of each traffic source, in this case, is not up to you.

Where do I need to find publishers for my ad campaigns in DSP and Ad Server?

In direct media buying with an ad server, you need to find publishers on your own. So you have to research your market and find suitable traffic sources for your business. In programmatic sales, you don't have to spend time on the search. A DSP matches you up to the best fitting publisher automatically.

Are ad server and DSP self-serve?

An ad server is always self-serve. A DSP can be both self-service or full-service when you hire a third-party agency to manage it for you. All-in-all, working with a full-service DSP is a little different from signing up for an ad network.

Is there any bid markup in the ad server and DSP?

There is no bid markup in an ad server, but you pay a platform fee depending on the number of your monthly impressions. A DSP is free-to-use, yet has a hidden bid markup.

Is it possible to white-label the platforms?

For those who want to avoid a bid markup in a DSP or want to build their ad tech software product, we offer a white-label DSP and white-label Epom ad server.

Do these tools have any data protection?

Ad servers and DSPs from reputable providers fully comply with GDPR. Otherwise, it would be no way to expand their business further. Moreover, DSPs and ad servers work only with 3rd-party data, which is not personally identifiable.

Is it possible to integrate Ad Server and DSP?

No, it's not. That's the one thing in which an ad server and a DSP resemble Marvel in DC. The crossover movie with the two is impossible, and so is impossible the integration between a DSP and an ad server. They can be used by the same advertiser, but can't be connected.

Which kinds of businesses is each solution the best for?

An ad server works best for businesses with an established network of supply partners. Usually, such a company is an ad network, ad agency, or a big brand. A self-serve DSP fits SMBs that want to automate their media buying. Large enterprises that favor programmatic will make more use from a white-label DSP.

How Ad Server and DSP are related to an ad exchange?

An ad server is used for direct media buying with no intermediaries involved. A DSP sometimes may connect to ad exchange first instead of supply-side platforms, making this technology an intermediary tool in programmatic advertising 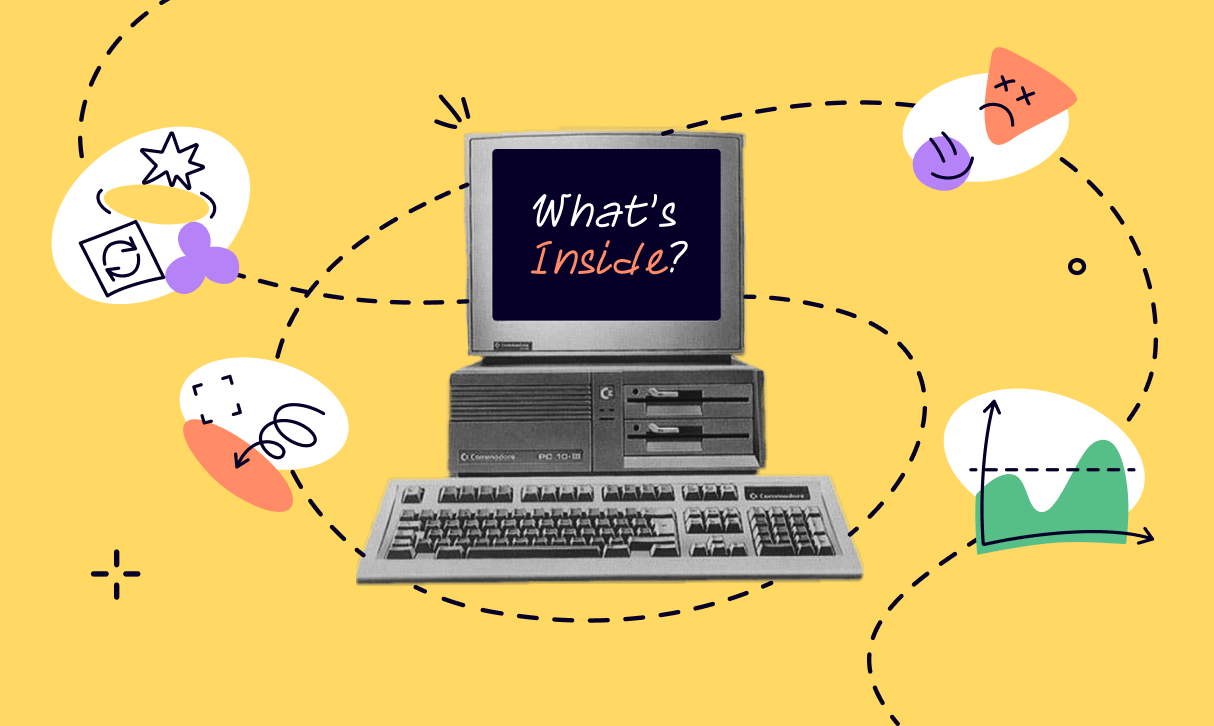 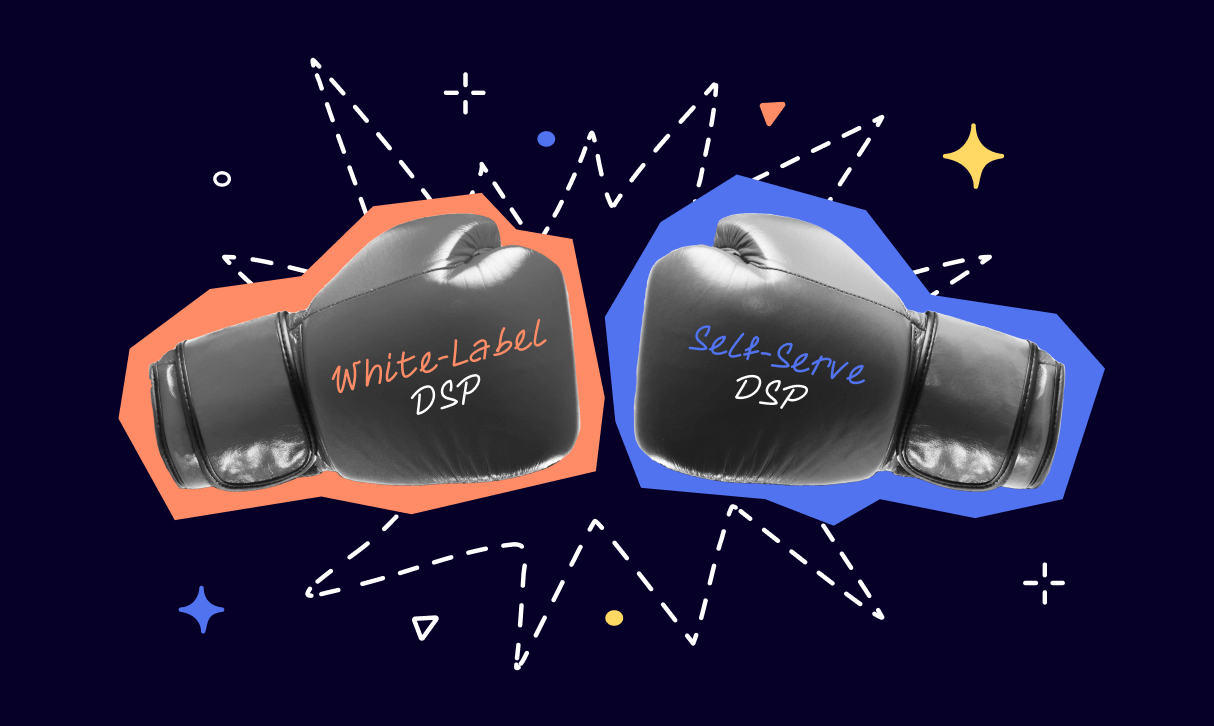 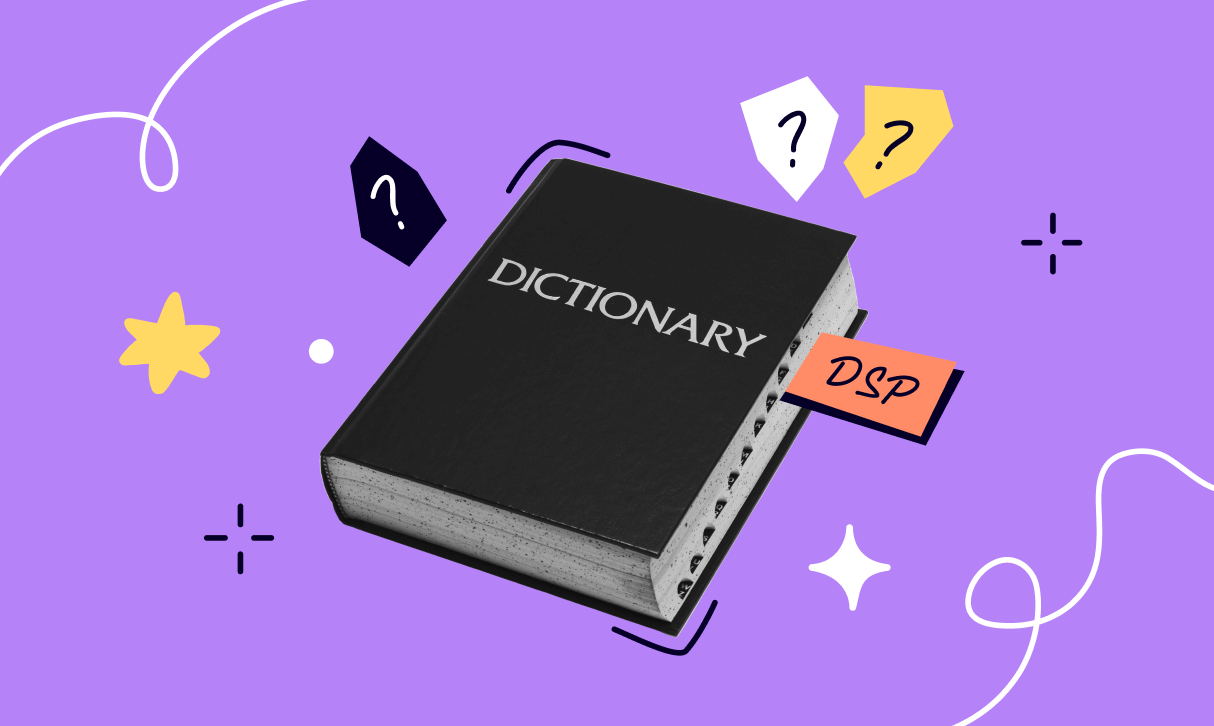 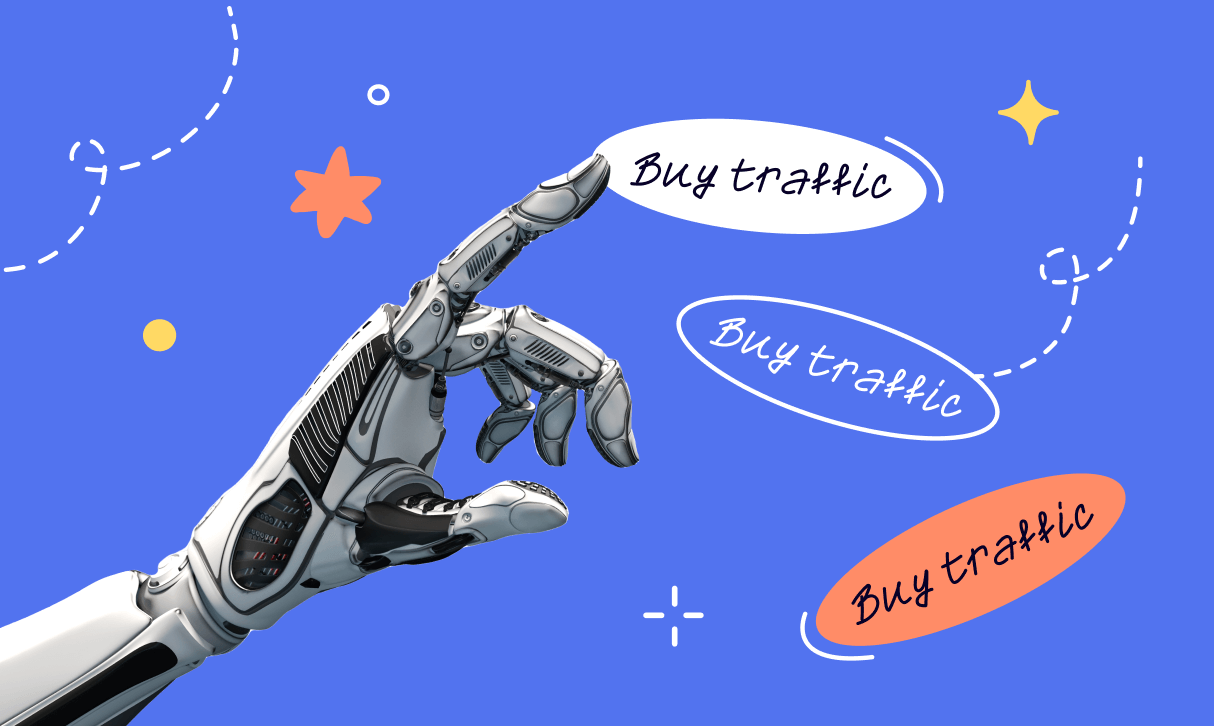